The Mutter Museum of Medical History

This museum is really much more like a turn-of-the-century cabinet of curiosity, one of those vaguely repulsive and infinitely fascinating collections of oddities designed to titillate, horrify and educate. This one just happens to be curated by the College of Physicians of Philadelphia, quite a respectable bunch of folks.

The Beaux Arts College of Physicians of Philadelphia

Created by a group of local physicians in 1787, this organization has the distinction of being the oldest medical society in the country. I love museums that have a mission and a purpose. Places like the Mutter Museum have a lot to offer the casual visitor, but for the writer, they are compendiums of opportunity.

Most visitors are struck by the Hyrtl Skull Collection, and it is impressive, but there’s one particular display I’ve never been able to get out of my mind. A showcase of wax models showing the ravages of untreated disease. Simple infections and illnesses that we no longer share.

They illustrate just how dirty we used to be…speaking collectively, of course. Our modern preoccupation with cleanliness, bathing, and laundering of clothes is a relatively recent interest. That’s not to say that there haven’t always been fastidious individuals in every culture, but in general, until recently we’ve been a mucky grimy bunch.

Modern life is sterile in comparison to how our not-so-distant ancestors lived. The sheer variety of boils, sores, abcesses, carbuncles, and blisterous oozing crusts that modern antibacterials have eradicated is mind-boggling.

That doesn’t even include the effects of vermin and their resulting pestilence, not to mention ectoparasites like bedbugs, fleas, mites, and lice that prefer human hosts. Most writers gloss over these ickies because who wants to have someone stop to scratch amidst a steamy love scene. There’s a great visual. 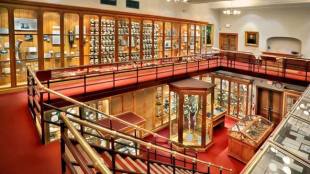 Years ago I watched a documentary about the Mutter Museum. I’d heard about the facility, but seldom get that far east of the Mississippi, so one afternoon I pulled up the couch and indulged. You can find it on the Travel Channel. If you aren’t repulsed yet, might as well give it a watch.

Here’s an amazaing book by the same name. Go ahead. Buy it. The photographs alone are worth the price. In fact a large number of books have been written about various aspects of the exhibits. The story of Cheng and Eng Bunker, a set of conjoined twins, is wonderful reading.

There are plenty of problems in the modern world but I’m grateful to live in this era because supporating sores, cracking carbunkles, and skeevy skin afflictions are easily treated. In fact, many are no longer found at all…one of the reasons collections like those at the Mutter are important.

Disease is an odd thing. Viruses and infections can reappear out of the blue and spread voraciously. Having a method for identifying symptoms become long unfamiliar can be useful, even critical.

Check out this wax model. Imagine a bunch of these plaques in your doctor’s office…just match your diseased wet stinking ulceration to one of those displayed on the wall and voila! Lesion identified. Diagnosis made. Here’s your prescription. Have a nice day.

I’ve talked my way into the storage rooms of several museums and know most (especially the big institutions), are a catastrophe of bizarre accumulations. The larger the collection, the easier it is for things to get jumbled up. For museums that have existed hundreds of years…forget it, they lose things all the time.

In its more than three centuries of hosting the public, the Musee du Louvre has misplaced entire rooms. And it’s understandable because with being housed in the remnants of a 12th century castle, displays in more than 300 rooms and 35,000 objects in rotation (and another 400,000 in the back), this largest of museums is hopelessly cluttered.

They ALL are. Useless and unwanted objects are donated by well-meaning families and institutions, even governments. Artifacts lack information about identity, provenance, and temporal associations which make it difficult to display them with any context. There is NEVER enough funding and virtually every facility is understaffed and underappreciated.

Considering what is on display at the Mutter – I can’t even imagine what is stored out of sight.

The collection can be shocking and it can feel insensitive to some viewers, but it isn’t only meant to be a spectacle, it also has great value. There’s a reason all this discomforting anatomical and pathological specimens were collected and maintained…because we learn from them. Sometimes they remind us of mistaken ideas and wrong conjectures that were too often presented as fact, like eugenics. Mostly, they provide insight to our study of human anatomy and our understanding of the human species.

If you’re in the mood to shop for an unusual gift, check out the Mutter Museum Store. It’s not a place for everyone. I found myself speechless after seeing the conjoined Gingerbread cookie cutter. But now, I may need one. I know! Just wrong…but still…

For those of you feeling further interest in genetic anomalies and how they express in human populations, check out these interesting reads:

~ Mutants: On Genetic Variety and the Human Body

~ A Cabinet of Medical Curiosities

~ The Two-Headed Boy and Other Medical Marvels

The world is filled with mysterious stuff – share what you’ve got! Do you find inspiration in unlikely places? What bizarre, strange, or nasty things get your brain chugging? Hopefully nobody unfriends me after this post.

This entry was posted on March 20, 2012, 3:00 am and is filed under Museums & Monuments. You can follow any responses to this entry through RSS 2.0. You can leave a response, or trackback from your own site.