The Art of Bending Stems

Basketmaking is an underappreciated artform and the baskets made by many California Indian women rank among some of the best in the world. This is an ancient tradition which has survived into the modern era. The bending of stems continues to be a vibrant and important part of the continuity of tradition among Native California people. Some of the greatest basketweavers of the recent past include Datsolalee, Elsie Allen, Elizabeth Hickox, and Lucy Telles. There are many others whose names are now lost but a strong resurgence in traditional practice ensures this is a tradition that will continue.

Weaving a basket is a complex process. There is a great deal of planning and preparation before beginning. Collecting and processing the plant material can involve a variety of rituals, prayers, and songs. Sometimes the act of locating and harvesting the proper reeds, stems, needles, grasses, and other plants is a challenge. Vegetal dyes are often made from local plants and used to color the raw medium. Designs are woven into the composition as a piece is created rather than painted or applied to the finished surface. The pattern of each basket has to be planned very carefully, if even a single strip is out-of-place the pattern can be ruined.

Datsolalee was also known by her anglo name of Louisa Keyser. A member of the Washoe tribe, she broke away from traditional forms of basketry, altering the shape and refining a stitching technique to create a form that came to be called degikup.  This degikup was a large basket which curved inwards toward the top rim and featured an expanded design covering most of the basket surface. Her work was influential in creating a “curio” style of basketry that appealed to collectors. She was a very talented basket weaver, completing over 250 baskets in her lifetime.

Lucy Telles was a superb weaver who shared her love of basketmaking with many and whose work continues to fascinate admirers. Of mixed Miwok and Paiute heritage, she found economic success in selling her baskets to tourists in and around Yosemite Park. Her work modified traditional Miwok shapes and instead of restricting decoration to the typical geometric patterns, she incorporated large and often stylized pictorial elements. The use of black and red dyes on a single basket was also a change from the older forms. She taught many others to weave and influenced an entire generation of basketmakers. 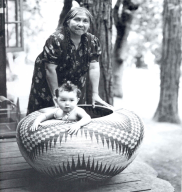 Lucy Telles, her grandson inside one of her baskets.

If you are interested in learning more about Native baskets and basketmakers, I recommend starting with these books:
~ The Fine Art of California Indian Basketry
~ American Indian Basketry
~ Remember Your Relations
~ Hopi Basketweaving
~ Indian Baskets of the Northwest Coast
~ North by Northeast
There are many other beautiful weaving traditions from tribes across the continent, look around and you’ll find the people are still here and they are still weaving. If you are interested in learning how baskets are made using the proper methods and materials of tradition, start with the California Indian Basketweavers Association. CIBA has been teaching interested folks about keeping the tradition alive for many years now.
What traditions matter to you?

This entry was posted on July 12, 2012, 3:00 am and is filed under Anthropology. You can follow any responses to this entry through RSS 2.0. You can leave a response, or trackback from your own site.