Getting Nude in Public

You may not know the name Spencer Tunick, but you’ve probably heard about or seen his work. He’s a photographer. He’s been taking photographs for a long time now but is best known for his group installation works featuring nudes.

People get nude for Spencer. By the thousands. Everywhere he seems to go.

He takes photography and makes it into a form of installation, and because his subject matter are people, who tend to do whatever they darn well feel like, it also becomes a happening. This sort of event has been celebrated in more places than you might expect. They’re a fascinating mix of organic and architectural features, visually stunning displays of humanity in a collective state.

Wanna see? Of course you do.

This is what he has to say about his installation pieces:

“individuals en masse, without their clothing, grouped together, metamorphose into a new shape. The bodies extend into and upon the landscape like a substance. These grouped masses which do not underscore sexuality become abstractions that challenge or reconfigure one’s views of nudity and privacy.”

This article in The Atlantic has a gorgeous photographic display of thirty-three of Tunick’s major human installation works. Locations span the globe, including locations as remote as the frozen stretches of the Aletsch Glacier and as centralized as Zocalo Square in Mexico City. No venue is off-limits. The larger the crowd, the more impressive the collective effect. One of my favorites took place at  Lyon’s Harbor during the Biennale Lyon Modern Art Event. I like this photograph because all the participants have their legs in the air. The pose is awkward and uniform at the same time. 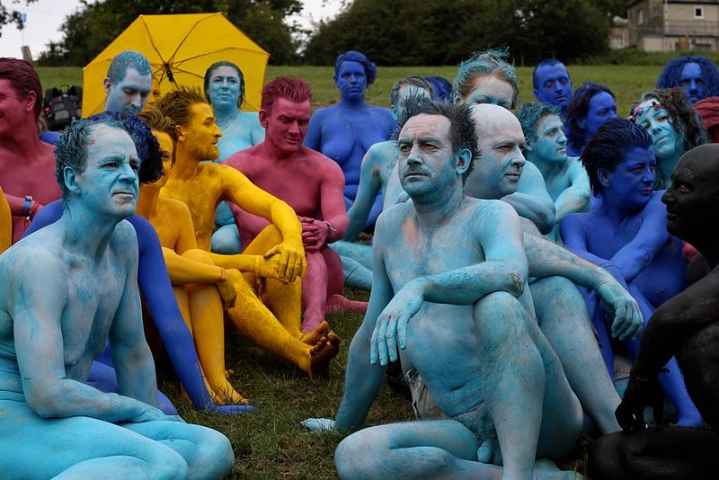 Installation at Eastnor Castle in England.

If you’d like to connect with Mr. Tunick, you can follow him on Twitter HERE and Facebook HERE. You can visit his official website HERE and even sign up to participate in a future photographic event. Reportedly, the artist arranges his subjects into groups, sorting by attributes such as gender, hair, age or other defining characteristics. The registration form requires specific information for categorization.

Here’s a nifty video detailing some of his work:

This video is a bit longer than the ones I generally include, but it has so many wonderful examples of his work, you should watch it all the way through. Art of this kind may not be your thing, but I always think it’s fun to explore new ideas. You can find more information about the artist and his works HERE.

What do you think about getting nude in public? You won’t catch me scurrying around downtown in the buff, but I confess, I’d love to go watch people participate in one of these compositions. Would you be willing to strip down and pose with hundreds of others?

This entry was posted on February 14, 2013, 3:00 am and is filed under Art & Artists. You can follow any responses to this entry through RSS 2.0. You can leave a response, or trackback from your own site.