Taking a Look at Jericho 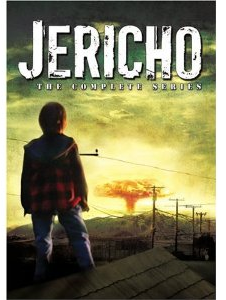 Recently someone recommended I take a look at Jericho, so I did. I’m talking about the television series here, not the ancient city of the same name, although it is certainly worth a once-over too seeing as it’s one of the oldest continuously inhabited cities on the planet. Just saying.

The TV show actually aired a while back, featuring twenty-nine episodes that were shown between 2006 and 2008. The IMDB database lists the show as an action/drama/mystery so there’s a little bit of everything going on.

I confess I knew nothing about the series but agreed to watch an episode and give it a try. The beginning was a bit mysterious, setting up the main character as someone with a secret, difficult family relationships, an old-flame about to marry a new guy, and then…whammy – an apocalypse happens.

Never having been a fan of apocalyptic or post-apocalyptic stories, I find myself intrigued by them now. Everybody’s favorite stupid zombie show, The Walking Dead, continues to eat an hour of my time every week as I wait for the last survivors to get whacked. Jericho is quite a bit different. The coordinated destruction of nearly two-dozen major cities across the U.S. leaves the tiny town of Jericho, Kansas reeling from a lack of information. Cut off from normal distribution channels, the townsfolk learn to do for themselves, with varying degrees of success.

Not always original in thought or presentation, the show is still appealing. The cast is fun. Jericho is good entertainment. I can understand why fans became so engaged with the crew. The actors play their roles well, each one convincing, if sometimes caricature-like. I confess to being fond of Mayor Green (played my Gerald McRaney of Simon & Simon fame back-in-the-day) because nobody can yell out commands like that man. The story line has a few bumps. The geography is a bit weird if you’ve ever been to Kansas or Southern California – which in my memory, don’t really look that much alike. Overall, it’s a fun quick watch. 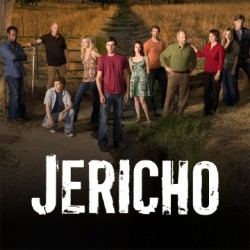 Like happens with the zombie show, I found myself evaluating what I would do in a like situation. The breakdown of societal roles is far easier to grasp under those circumstances and several times I walked away feeling like I wouldn’t have turned the other cheek. You should give it a try and see what you think.

The show was cancelled after season 1 and that’s too bad. Apparently ratings were never as strong as the people who care about those things preferred, but the show collected a faithful following of committed fans.

That’s fun. And did I mention they were committed? As in rabid.

They staged a little revolt of their own and took some extreme measures to show their support for the actors and the show, raising money and buying full-page ads in magazines and newspapers asking producers to offer a second season. Letter-writing campaigns were initiated. Eventually, the guerilla tactics worked. Convinced that the audience was growing, another season was ordered…but then cancelled a second time, after only seven episodes. Again, too bad. At least the writers were able to squeeze in some closure for the various story threads without shutting down the entire plot of the series. Fans were disappointed.

Here’s a trailer for the series:

You can buy Seasons 1 & 2 on DVDs from Amazon or stream both seasons from there or Netflix. Season 3 was written by the same folks who did the television series but it was released in graphic novel form. I haven’t read it but I hear good things. Season 4, also in graphic novel form, is available for pre-order now and will wide-release in June of 2013. As you can see, the hype lives on. I discovered quite an active interest on chat boards, especially considering how long after the debut of the show we’re talking, and chatter continues about the series being renewed by a cable channel.

Persistent rumors suggest that if sales of the graphic novels continue to be good, the story may be brought to the silver screen as a stand-alone movie. In the meantime you should give it a watch and see if you’re intrigued enough to watch episode two. You know that’s how it works – one teaser leads to the next. I’ll keep an ear open for any new developments. I’d like to know how the survivors fare as the nation rebuilds. Aren’t you curious now?

This entry was posted on March 14, 2013, 3:13 am and is filed under Film & Television. You can follow any responses to this entry through RSS 2.0. You can leave a response, or trackback from your own site.