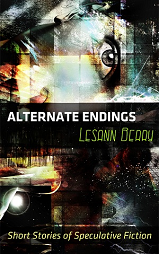 Alternate Endings is available now over at Amazon, but you’ll be able to find it at other outlets down the road. If you can’t pick it up right away, there’s sure to be a sale or free-download-day in the near future. An honest review is always appreciated – no hard feelings about anything of value you have to share.

Alternate Endings features a dozen short stories of fantastic fiction. These are tales about people who grasp at the chance to fulfill their greatest desires. They suspect the road not taken doesn’t always end happily and know the path they’re on can lead to unexpected places. Choices change the course of lives. Each new day offers opportunities that propel them toward alternate endings.

Inside you’ll find stories about:

“Sam flipped his middle finger at the shiny CNN chopper. Damn news vultures would replay the image for days. The studio and the network had sold them down the river. Years of experience in show biz had taught him the best way to survive a season, was to win viewers. If they could get the public rooting for the surviving members of the documentary film crew, they’d have a better chance of climbing out of this caldera while they still had the body parts to do so. Americans love the underdog.” – Adventure in the Caldera

“Knuck raised his gaze and admired the span of the grand art deco architecture. The graceful lines of the elegantly arched design sat silhouetted against the fathomless gloom of the dark sky. He knew the bridge, all right. Not far from here was the fateful place he should have met his wife so many years before. He recalled every detail of that night with startling clarity. Afterwards his world went numb. Everything good had been stripped from his life. All because he’d been late. Yeah, he knew this place.” – Late for Life

“Fairy tales turned them into something soft and sweet but that’s public relations bullshit. The truth is, they’re vicious beasts. Evolution made them beautiful and lethal. Their hooves are natural weapons, sharp as chipped flint. The tail on an immature foal is whip-hard and the feathery wisps of hair can flay skin to the bone with a single swipe. Mature males have venomous bites capable of causing instantaneous paralysis. In the gestation period, the females snort flames and the damned stuff acts just like napalm, sticky as jelly and burns hot as phosphorescence. They live for centuries and mate for life.” – Shadow in Moonlight

Print copies will be available down the road. Right now I’m putting the finishing touches on a stand-alone short story that should be available for consumption in a couple of weeks. Stories are lined up in the queue and I’ve got a lot planned for 2013. I hope you’ll come celebrate with me!

This entry was posted on April 18, 2013, 12:37 pm and is filed under Author Promotion. You can follow any responses to this entry through RSS 2.0. You can leave a response, or trackback from your own site.