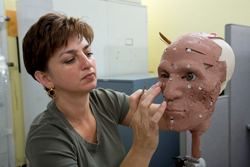 Anthropology is an enormous discipline. As a field of study, we’ve got fingers in every pie in the universe. Today’s topic narrows down the field of forensic anthropology to take a look at facial approximation – or what lab personnel often call reconstructing the dead.

What does it take to overhaul a human skull and make it look like the living person?

The process involves many steps and is not the first effort made in determining someone’s identity. The idea is to reconstruct the face of an individual whose identity is unknown (usually the victim of a crime or a national disaster) or whose appearance is in doubt (think early hominins here – we never stop arguing about how Neanderthals looked). 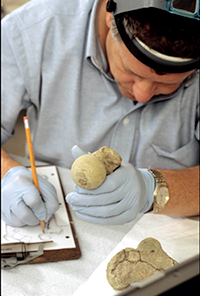 By using skeletal remains, and drawing on a combination of skills and backgrounds, forensic reconstruction requires artistic, forensic, scientific, anthropological, osteological, and anatomical data in an attempt to reproduce a recognizable face that can be identified.

Despite what television shows would have the casual viewer believe, this sort of reconstruction is usually a final effort in attempting to identify human remains. Also, different techniques are used to create two-dimensional representations before a clay model is attempted. If an image of the suspected individual has been identified but no physical attributes (dentition, healed injury, etc.) are evident and a conclusive connection has not been formed, researchers may turn to imaging in an effort to see if the morphological features of the skull might match the image of a known individual. Scaling the image to match the size of skull, the picture is superimposed over the cranial form to see if features align. Sometimes the result is startling for the degree of animation the image provides to the bone.

The process of craniofacial reconstruction using clay and modeling materials to mimic the appearance of tissue, muscle and skin is both controversial and complicated. The steps involve applying varying depths of material in order to form the underlayment of musculature and form. The problem is doing this stems from the fact that there is no standardization among people. Although we are remarkably homogenous for a species, faces are quite individual. Breadth of tissue and circumference of the head can vary dramatically from the actual bone surfaces beneath. Other areas of variance include cheek depth, chin recession, jaw alignment, overbites and underbites, not to mention the development or atrophy of particular musculature. Sex and age change the appearance of our face so determining both, for any set of remains, is an important starting point.

Critics and proponents agree that craniofacial modeling is part artistic interpretation and part scientific reconstruction. Despite the controversy surrounding this technique, facial reconstruction has proven successful often enough that research and methodology continue to advance.

How about a recent case study?

Poor King Richard. History has not been kind to this monarch. Smote on the battlefield and maligned by generations of bad political press, this sovereign was buried in a hasty grave, only to be discovered under a car park. For you speakers of American English, that means he was found under a parking lot. Not the proper place for deceased monarchs to lounge away eternity. Check out the facial reconstruction of the King’s features and read the details of the long search for King Richard.

Want to explore this subject further?

This entry was posted on October 17, 2013, 3:22 am and is filed under Anthropology. You can follow any responses to this entry through RSS 2.0. You can leave a response, or trackback from your own site.