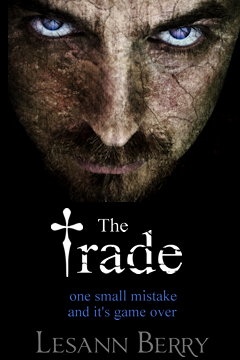 The Trade is available NOW!

Clickity HERE to get your very own copy. This novella features a recurring character named Savio Mendes and he’s scheduled for a series of novels in the future. Despite the nature of his mercenary work, he’s conflicted about the downward spiraling state of his life and sets out to change his future. This is a quick read that dovetails nicely with The Vitae (funny how that works) and can be yours at various outlets.

For those of you who like to know in advance, the ebook version runs a mysterious length but the paperback edition is 135 pages and should be available for your hot little hands in just a few weeks.

At the request of a trusted colleague, ex-soldier Savio Mendes departs for Mexico City with the goal of gathering data on a drug network. When circumstances force him to get involved in locating a runaway family member for the head of the cartel, his role as clandestine observer is compromised. To complicate his already screwed position, Savio soon discovers he’s been directed to undertake a different job than the company authorized. Unsure who to trust and no longer certain who he’s actually working for, Savio begins to question if this life is the one he really wants. In the dangerous world of narcotics trafficking all it takes is one small mistake and it’s game over.

An hour later a noise wakened him.

Climbing out of bed, he staggered to the window and peered outside. The clock hadn’t even turned midnight but a shadow crept from shrub to tree trunk. Amateur. The bent-over figure darted like a ludicrous cartoon thief in a child’s animated movie. An overturned deck chair sprawled beside the pool, probably the noise that woke him. The culprit again lurched through the night. Amusement curved Savio’s mouth. He’d caught sight of the over-sized handgun clutched in the intruder’s right hand. Dirty Harry had arrived.

He pulled on a pair of sweats and trotted down the main staircase, eyes scanning outside the windows until he pinpointed the visitor near the foundation. The stranger gazed up at the second-story balcony of the master suite.

The lock made a soft click when Savio turned the knob. There was no change in his late night guest’s demeanor, so he eased open one of the patio doors and stepped out on the tiled expanse. The ceramic was cold underfoot. The uneven surface provided rough traction against the soles of his bare feet. The garden lights were placed in strategic locations, most of which had been shut off by an automatic system. The few lit ones shone where a late night arrival might walk. In the reflected light Savio identified the figure as a young man. The profile of the gun he carried showed an antiquated pistol. A bullet fired through a barrel corroded from disuse would be dangerous, more so for the shooter. For a few seconds Savio studied the scene. Youthful and armed, the miscreant skulked around the outside of Fillone’s home with a purpose. He’d bet a silver dollar this kid led in a straight line back to Aurelia.

He crossed the tiles, stepped on the grass and snagged the boy in a headlock. Disarmed with a twist of the wrist, he clamped a hand across the boy’s mouth and cut off a high-pitched squeak of shock. He dragged the prisoner inside the house before they attracted attention. Savio was certain Almeida had stationed a man in the perimeter between here and his sister’s home. The boy struggled, flailing his hands until his fingers found purchase and wrapped around Savio’s wrist. He tried to pry away the blockage that constricted his air. Savio tightened his arm in response and the boy’s brief panic subsided into submission.

I hope you’ll check out Savio’s first venture into print. Available on KINDLE, NOOK, and KOBO, and before-you-know-it at iBOOKS and Indiebound. Keep an eye on Goodreads for upcoming promotions. Thanks for celebrating with me!

This entry was posted on April 24, 2014, 3:15 am and is filed under Author Promotion. You can follow any responses to this entry through RSS 2.0. You can leave a response, or trackback from your own site.